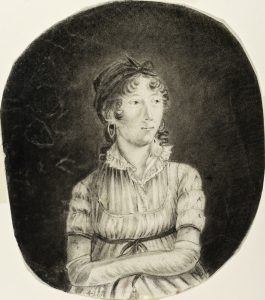 Join Roberta J.M. Olson, Curator of Drawings at the New-York Historical Society, for an intimate tour of the milestone exhibition Artist in Exile: The Visual Diary of Baroness Hyde de Neuville

"Self-taught and ahead of her time, Anne Marguérite Joséphine Henriette Rouillé de Marigny, Baroness Hyde de Neuville (1771–1849), was the first woman artist in America to leave a substantial body of work. Granted exile by Napoleon, she first made her mark in New York City and later Washington, D.C., and her art celebrates the people and scenes of the early American republic, documenting the young country’s history, culture, and diverse population. Neuville’s status as a woman and an outsider made her an astute observer of people from varied backgrounds, and her work documents such significant figures as one of the first visitors to America from China and the earliest accurate portrayals of Indigenous Americans. The first serious consideration of her life and art, this exhibition showcases 114 watercolors and drawings by Neuville, including many that were recently discovered, among them 43 new acquisitions by the N-YHS and a promised bequest."

Visit the N-YHS website for more information on the exhibition. This tour takes place on the final weekend of Artist in Exile.

Registration is required for this event.
Registration will begin on January 7, 2020.
Click here to Register