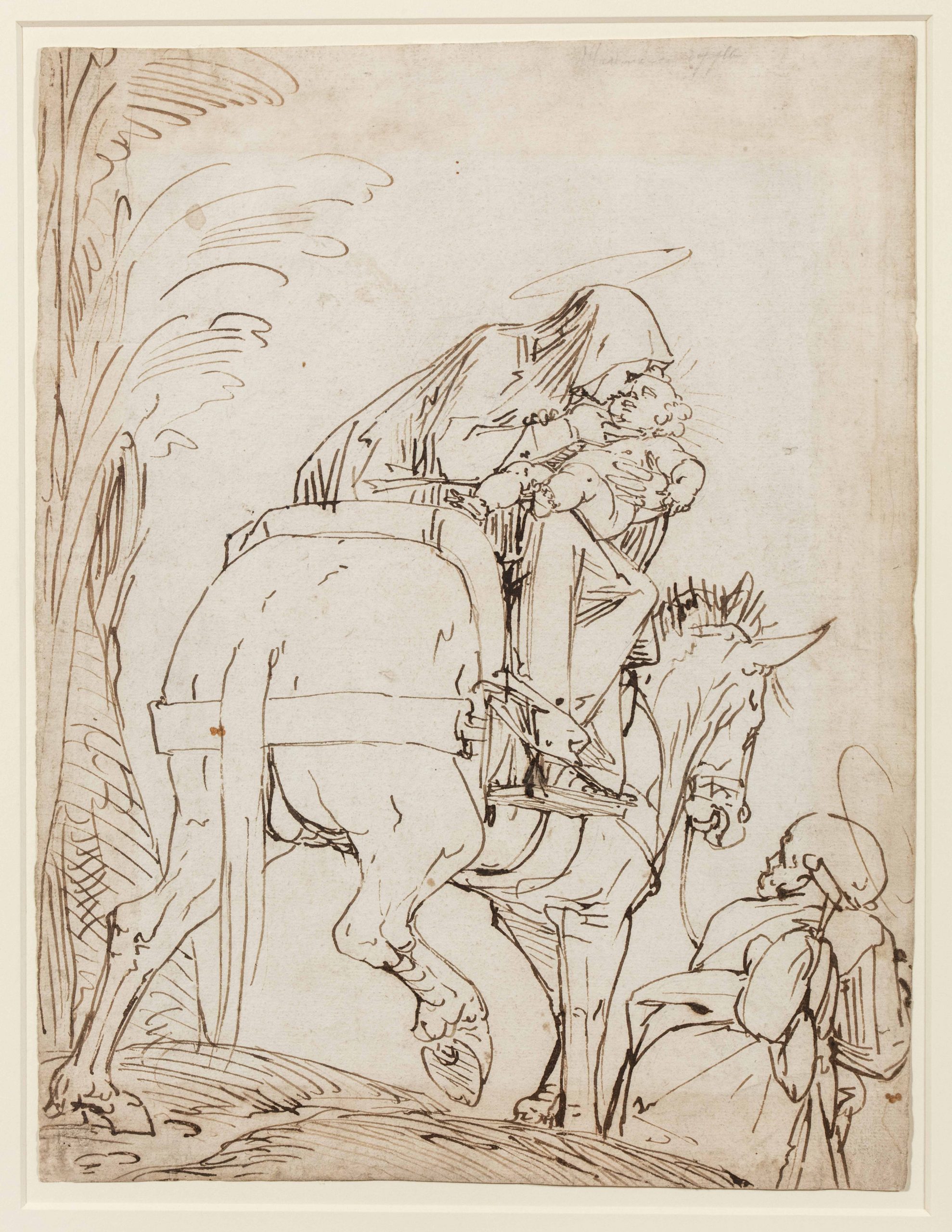 This expressive and boldly executed drawing is the work of Luca Cambiaso, the leading artistic personality in Genoa in the sixteenth century and one of the most dynamic draughtsmen in European art. The drawing dates from the mid-1550s to early 1560s at the height of the artist's power. At this moment in his career, defined by his "serene style," Cambiaso's compositions became more focused and reduced to their essential elements. The mule's hind quarters dominate the visual field and the outdoor setting is indicated by little more than the tree standing along the left edge of the sheet. The large scale of the drawing and the calligraphic penmanship, which lends a motion and drama to the scene, provide significant visual interest and appeal to the modern eye. Cambiaso's spontaneous handling fully exploits the dynamics of the quill pen-the lines are vigorous, animated, and possess a great suggestive power. Both vibrant and audacious in its depiction of the Flight into Egypt, this drawing represents an exceptional addition to Cambiaso's graphic oeuvre.

Cambiaso infuses the otherwise inert biblical narrative with dynamism by placing the figures close to the pictorial plane and orienting them along a steep diagonal, from the upper left to the lower right, giving the appearance that they are about to descend a steep slope and disappear from view. The artist employed a similar vertiginous compositional device in his drawing of the Chariot of the Setting Sun, in which the horses are similarly conceived. More explicitly, and using the same media, Cambiaso's drawing of Saint Martin and Beggar in the Princeton Art Museum displays a horse almost identically envisaged. A horse seen from behind with its right rear leg raised was a leitmotif for the artist, with some details, such as the diagonal hatching to indicate the shadow on the underside of the hoof, closely repeated. Regarding the representation of the mule in the present drawing, it is important to note Cambiaso's acute sensitivity to the subject matter, even when composing with speed. In contrast to his many drawings that include horses with elaborate tack, such as the Saint Martin and the Beggar, our composition shows a plain stirrup and strap across the mule's hindquarters and its tail is not elaborately plaited. The treatment is in keeping with the theme of poverty that underlies this biblical subject (Matthew 2:13-15). The Holy Family were, after all, refugees, and the fact that Herod was intent on killing the child would appear to explain Joseph's somewhat anxious glance over his shoulder.

The drawing displays many of the salient characteristics of Cambiaso's draughtsmanship. In a manner entirely consistent with his working method, he first sketched his preliminary ideas with thin pen lines in a lighter ink over faint traces of black chalk and later confirmed or corrected them with a darker tone of brown. As is typical of the artist, spare hatching suggests the surrounding space and foreground terrain. Half-moon like circlets indicate pebbles in the foreground, with long looping lines defining the leaves of the palm tree, terminating in hooks as the pen shifts from right to left. Typically, limbs, hands, lips, noses and eyelids are slightly geometricized with circlets, triangles, ticks and hooks, and quick flicks of the pen indicate knees, muscles and tendons. The articulation of the Virgin's hand and the physiognomy of the infant Christ are nearly identical to those in Cambiaso's Virgin and Child with Putti, formerly in the collection of the Rugby School. Tellingly, so too is the relationship between mother and child, as the Virgin intimately embraces the infant Christ.

Within the context of Cambiaso's drawings, the scale and format of this work, the quality of execution, and above all its striking interpretation of the subject suggest that it was conceived as an autonomous work rather than a preparatory study for a painting. Its monumentality, dynamism, and the clarity of narrative appear to connect it with a number of comparably large drawings illustrating the early life of Christ. These include two versions of the Holy Family at Rest preserved in the Rijksmuseum and the First Steps of the Infant Christ in Edinburgh. The early inscription on the verso of this sheet-"3. una Madonna che va in Egitto"-suggests it may have been the third in sequence of a series of subjects drawn on a similar scale in the same technique owned by an early collector. Cambiaso's only known treatment of the subject in paint is an altarpiece of La Fuga in Egitto that is mentioned in an early guidebook to Genoa as in the church of Santa Maria delle Grazie al Molo outside the city, close to the Porta Lanterna (current location unknown).
Download Artwork Tear Sheet