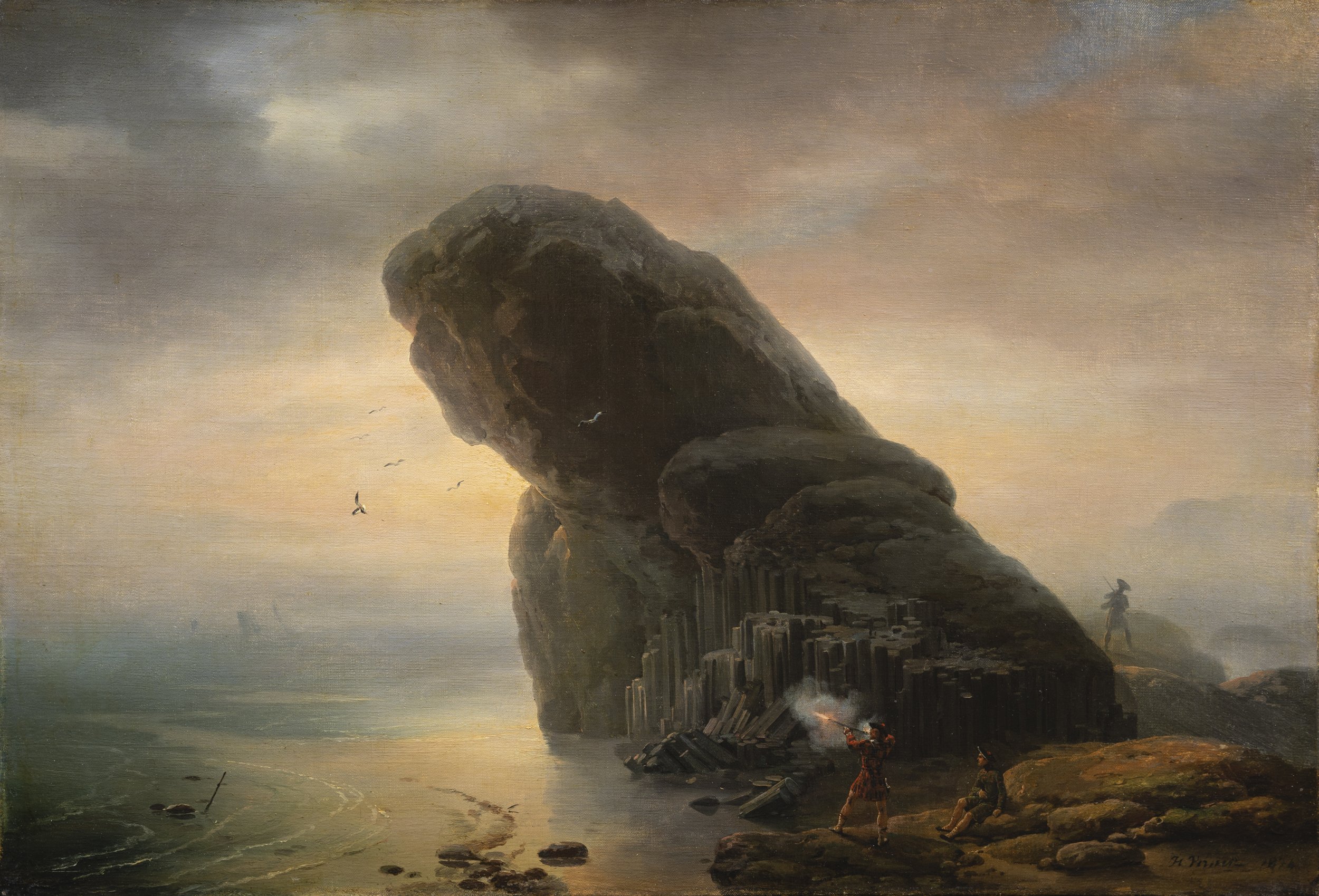 Progeny of a family of great painters, grandson of Joseph Vernet (1714-1789) et son of Carle
(1758-1836), Horace excelled in art as had his ancestors. His father taught him the rudiments of art before he found a place as a pupil with François-André Vincent (1746-1816). Alongside David and Regnault Vincent was head of one of the three studios whose pupils successfully contested every year the prizes of the école des Beaux-Arts. Vernet received a gold medal at his first exhibition at the Salon of 1812 for La Prise d'un camp retranché. At the age of 23 he had become famous and commission flowed.

Vernet's paintings, drawings and lithographs were to be found in the richest collections, both in France and abroad. His artistic precocity, ease of execution and ability to catch a likeness impressed all. He conceived his subjects with great speed and his largest compositions remained fixed in his memory down to the smallest detail. Endowed with a prodigious visual memory he was able at a distance of twenty or thirty years to recall a movement, a gesture, almost invariably without having recourse to the model. Vernet never hesitated before a blank canvas, the complete painting already in his head. He sketched and finished each part at once, even though the remainder of the composition was not even traced on the canvas. Well observed expressions accompanied true poses and correctly detailed costumes. He treated his wide subject matter with equal distinction, whether battle scenes, marines, hunts, animals, landscapes or portraits.

Vernet's Salon exhibits confirmed his extraordinary talent. Thus, at the 1824 Salon, which opened as it did every year, on 25th August, he showed numerous paintings. The booklet listed the following:

1 painting. Equestrian portrait of S.A.R. Mgr. le duc d'Angoulême
1 painting. Camel, a woman and child nearby
1 painting. Preparations for the departure to the races
2 paintings of hunts

In addition to the paintings listed in the Salon booklet under no. 1715, Vernet exhibited a further thirty paintings. Le Journal des débats politiques et littéraire of 16th October noted: "M. Horace has made me lose my head at the Salon with his thirty paintings". The critics were unanimous in their praise of his work. The journals gave space to a few paintings which they found most noteworthy, with the exception of Auguste Jal who devoted fifty-one pages to the artist in L'Artiste et le Philosophe, entretiens critiques sur le Salon de 1824. It is here that one finally discovers that Vernet exhibited four hunt subjects. La chasse au marais [Shooting in the marshes] better known under the title of Chasse aux canards effet de brouillard [Duck shooting in the mist] which had for pendant La Chasse au cerf [The Deer Hunt] correspond to the first two hunts that Vernet registered with the Salon, both purchased by the dealer and publisher Claude Schroth. In Vernet's account book, the first canvas was acquired on '4th January 1824: Painting sold to M. Schroth, Une chasse au brouillard. 2.000 francs' and the second '20th October 1823 Un tableau de chasse sold to M. Schroth 2.000 francs'. If the title of the second painting may be equivocal, the catalogue of the Bauchot auction on 21-26 February 1825 included both paintings as lots 473 and 474. They appear to have been purchased by Schroth, for following his bankruptcy, the catalogue for the sale from 30th May to 6th June 1826 contains a manuscript page listing various paintings, among them "two landscapes by M. Horace Vernet: 1) La Chasse aux canards effet de brouillard (1.100 francs) / 2) Une forêt (700 francs)." The deer hunt is mentioned by Jal as in a wood.

The third hunt scene shown at the 1824 Salon cited by Jal bears the title Rendez-vous de chasse, all the huntsmen being dressed in red. This was the painting acquired by the banker Jean-Georges Schickler from Vernet. His account book notes "5th December 1824 By M. Schickler, Une chasse 8.000 francs". In the review in Beaux-Arts for 15th February 1863, it is mentioned: "1824. Rendez-vous de chasse ; rapport de valets de limiers ; to M. Schickler.

The fourth and last hunt presented at the Salon and noticed by Jal corresponds to our painting. He writes of the subject: "Let us stop a moment before this rock, on which some Scots are making war on the gulls. It is most original in every way." As Jal clearly states, it is a most original composition. A passsionate hunter, Vernet has here chosen Scotland, its rocky coast, the volcanic origins of Fingal's Cave on the Isle of Staffa, formed with its basalt columns resembling organ pipes made of grey stone. On these rocks at low tide, in the uncertain light of early morning under a misty sky are three Scots, their dress painted with great attention by Vernet who had made a multitude of drawings for the Journal des dames et des modes between 1811-1815. They are dressed in the traditional highland costume, wearing the tartan kilt, the sporran, the ghillies, leather shoes laced above the ankle, the sgian dubh, a dagger lodged in the right stocking, and their Tam o'shanters. Two are shown shooting, the central figure surrounded by the smoke from the shot just taken.

Unlike the other hunts, there is no mention of this painting in Vernet's account book. Should one assume that he therefore offered it to a close friend?

At the time that Vernet painted this picture there was a strong fashion for Scotland and for the author Sir Walter Scott (1771-1833) whose works had just been published in French in 41 volumes. The journal Le Constitutionnel of 26th October 1824 reported : "If anyone were to doubt the fame of Walter Scott, the Salon this year would make him realise the extent to which he has captured the imagination of our painters. These are not simply a few remarkable scenes from some Scottish novels which our painters have been pleased to describe with their brush, the charm has acted more powerfully on them and summoned them to Scotland itself. One perceives that the country of Walter Scott has been fully explored by them...and that in their poetic pilgrimage they have acknowledged the least site described by the author of The Puritans".

In 1814 Scott's visit to the Isle of Staffa and Fingal's Cave had inspired the poem The Lord of the Isles (1815), in which he wrote:

That wond'rous dome
Where, as to shame the temples deck'd
By skill of earthly architect
Nature herself, it seem'd, would raise
A Minster to her Maker's praise!

Later Scott would write in his Memoirs: "One of the most extraordinary places I ever beheld, it exceeded, in my mind, every description I had heard of it; composed entirely of basaltic pillars as high as the roof of a cathedral, and running deep into the rock, eternally swept by a deep and swelling sea."

Among the other paintings exhibited by Vernet under no. 1715 was Allan M'Aulay (London, Wallace Collection) taken from Scott's novel A Legend of Montrose (1819), and also A portrait of a woman described by Jal as follows: " The Scottish plaid which forms part of the dress of this attractive woman whom M. Vernet had the pleasure of receiving in his studio and the singular manner by which her ring is held by a small chain, all this seems to me to indicate a compatriot of Walter Scott."

Finally there is a Portrait of Walter Scott (157 x 114) in dark pencil, undated but inscribed In French, 'Walter Scott by my grandfather V.D. [André Delaroche-Vernet]' - "This portrait of the author was perhaps drawn during the year 1826 when Walter Scott stayed in Paris with one of his daughters".
Download Artwork Tear Sheet